History of the Summit County Courthouse 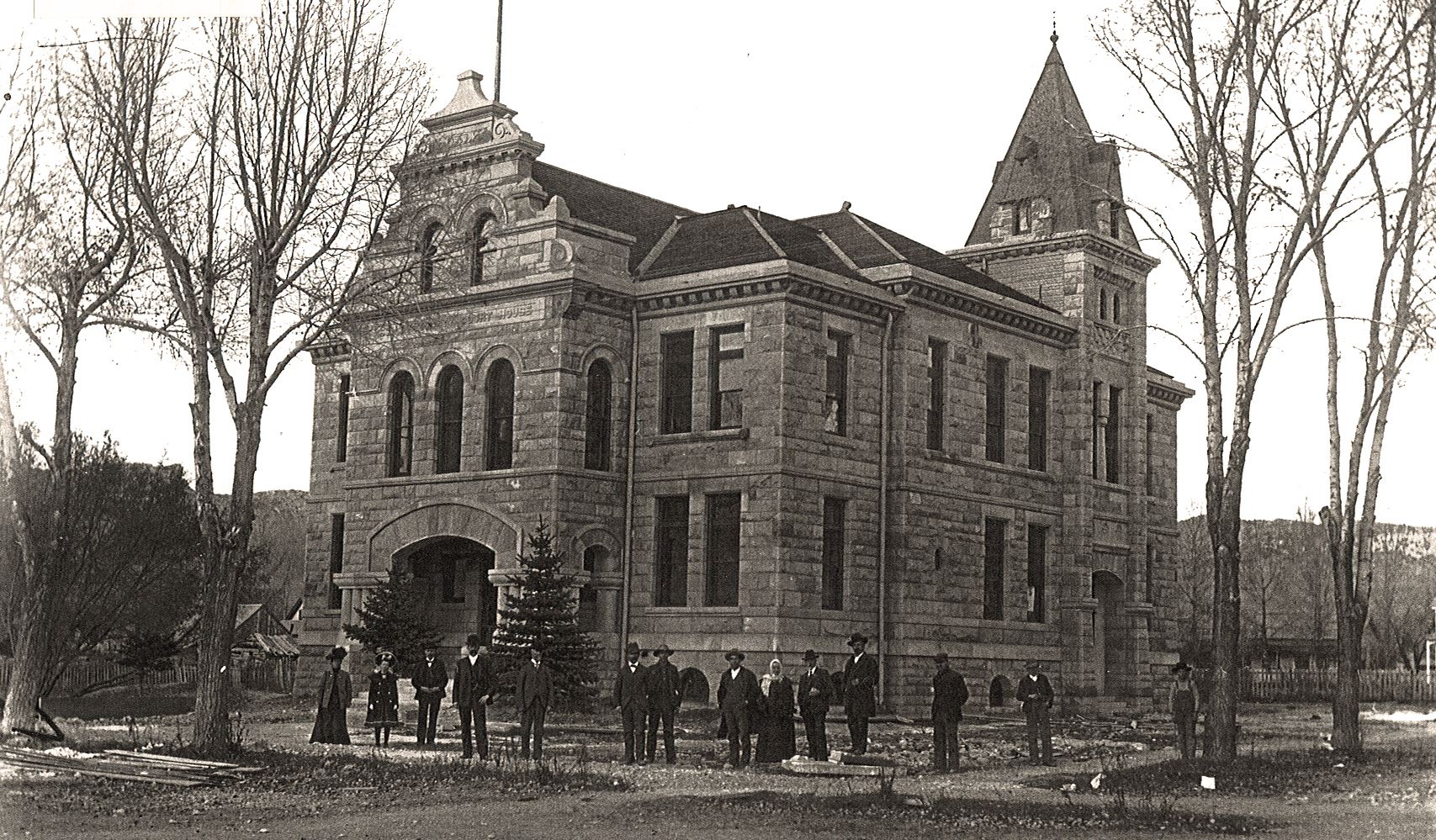 In 1852, the Legislative Assembly of Utah voted to divide the entire territory into twelve large counties. In 1854, they created a new county called Summit County. Between 1854 and 1880 the size and shape of Summit County changed several times until 1896, when Utah became a state.

Because of its central location, Wanship became the first county seat. The county held court in a log cabin that still stands today. The county government consisted of a probate judge and three selectmen. The first minutes are dated June 1866. According to records left by old settlers, court was also held in the building known as the Wanship Hotel.

By 1871, the town of Coalville has taken off. Coal was discovered and businesses prospered in conjunction with the nearby town of Echo and the Union Pacific Railroad. Residents of Coalvile petitioned to move the seat to their town. A two-story brick building was built and Coalville officially became the county seat. The old Summit County Courthouse commenced in 1871, was used as a courthouse and jail.

With the booming coal mining industry, the county seat moved to Coalville in 1872. Beginning in 1880, Park City wanted to move the county seat from Coalville to Park City. With the discovery of silver in the late 1860's Park City had grown to a town of over 2,000 people by 1880, with a town water system, telephone service and over 350 buildings including a bank and fire department.

The idea of moving the county seat was unthinkable to Coalville residents. However in 1895, Park City boosters introduced a formal proposal to move the county seat. At the centerpiece of the proposal was the offer by the city to "erect and give the county a building suitable for county purposes, to cost not less than $10,000". Coalville residents were not persuaded and when the measure was put to a county wide vote, it was narrowly defeated.

But Park City residents wouldn't give up easily. Most of the county tax revenue came from the Park City area and having the courthouse in Park City would better serve the needs of a majority. Coalville citizens countered by stating that it was their town that supplied the foodstuffs and fuel essential to Park City's livelihood. So seven years later the issue was back on the ballot. The vote in 1902 was about 120 votes short of the two-thirds majority required to move the county seat.

In May 1903, the county commissioners, Freeman Malin, J. C. Paskett and William H. Smith, voted unanimously to erect a new county building in Coalville. The lot was purchased for $1500 with architects from Ogden being awarded the contract to design the building. Ironically, the contractors selected were E. J. Beggs of Park City and J.H. Salmon of Coalville. Their low bid was $19,887. Salmon owned the stone from which the courthouse was constructed. Work began in August 1903, discontinued for the winter and the building was turned over to the commissioners in November 1904. In 1973 the building made the list of the National Register of Historic Places.

In 1905, a separate jail was built in the same style by T. L. Allen to the rear. The jail was demolished in the late 1970's to make way for the substantial addition to the courthouse. At this time the old courthouse was "modernized: ceiling heights were dropped, suspended acoustic tile and fluorescent lighting installed the wooden double - hung windows were replaced with aluminum windows and the transoms opaqued. Office spaces were updated with the application of plywood paneling and original tall base moldings and chair rail either covered or removed. "Virtually all of the original interior doors with transom lights above were removed. The newly renovated Courthouse opened in May 1980.

In 1994, the Summit County Historical Society discovered that underneath the acoustic tile ceilings, the original pressed-metal ceilings still existed. With a grant from the Utah State Historical Society, they developed a plan to restore ceilings in the public portions of the old courthouse to its original condition. Engaging the services of Smith Balle Hyatt Architects, they also developed a feasibility study to restore the entire courthouse.

The outcome of the ceiling restoration was the support of the employees, county officials and the community to fully restore the older portion of the Courthouse. In 1997, the Commissioners awarded P.J. H. M. architects from Cedar City the contract for the design to include the restoration of the old courthouse, remodel of the 1970s addition and to include an addition to the rear. Contractors, Eagon-Johansen Co. from Salt Lake were hired in October 1997 with an l ow bid of $2,755,310.

The style of the courthouse is Richardson Romanesque, a style made popular by American architect Henry Hobson Richardson in the last quarter of the nineteenth century. Popular in designs of civic, commercial and ecclesiastical buildings nationwide; characteristics include substantial weight and mass of all stone masonry building, towers, arched entrances, and semicircular arches used in windows, doors and porches.