In Summit County, schools were more than just classrooms. They were shapers of community, the scene of social and cultural activities, educational contests and events, and other community assemblies. Schools helped to Americanize new immigrants and prepare all children for their roles in the community. 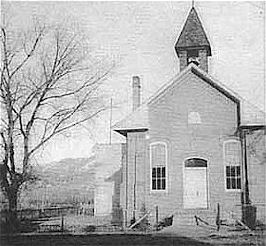 In 1862, the county selectmen divided Summit County in to school districts; at the time, schools were funded in part by a toll collected by the territorial government on the Brizzee Bridge across the Weber River. On 26 April 1865, the county court allocated a 50 dollar annual salary for Alonzo Winters as the new county superintendent of schools for 4 years. Thomas Bullock, Redden A. Allred and Hans Young formed a board of examiners for school teachers.

Generally, each town comprised a district of its own, with its own number:

The pattern of small school districts, which first originated in New England, was particularly effective in a place like Summit County, where individual settlements were scattered across the valleys and traveling from one town to another was difficult.

The principal school officer in Summit County was the appointed superintendent. Each individual school district had its own 3 member board of trustees, which allocated funds and oversaw the building of new schools, hired teachers, and furnished equipment such as books and desks.

Traditionally, books were owned by families who passed them down the line as each child advanced to a higher level; it wasn't until after 1900 that the district offered school books. As towns grew, they built bigger schools or added rooms to existing buildings. (excerpt from A History of Summit County by David Hampshire, Martha Bradley and Allen Roberts. Copies available for purchase from the Summit County Courthouse).

In 1866, Wanship built its first log school house and Mr. Boudy hired to teach the local children. It was soon replaced with a one room structure, built from local rock. By 1912, however, the community had also outgrown this building so it was torn down and replaced with a modern brick two-room school house.

A central hallway divided the building into two equal sized classrooms, 1 for grades 1 to 3, the other for grades 4, 5, and 6. Classes were small and the building rarely housed more that 25 children.

By 1949 class sizes had fallen so dramatically that the North Summit School district decided to close the school and bus the children to Coalville. There were only 2 of us in my 6th grade class, remembered Dorothy Young, and only 1 in my sisters class the following year.

The tragic fire of the Wanship church in November 1958, brought new life to the abandoned school. Members of the local ward along with groups from neighboring towns, including the Coalville Jaycees, spent many hours cleaning and painting. In a matter of weeks, the building was ready to serve as the local meeting house, kept in use during the 2 years it took for the Wanship Ward to build a new chapel.

Roland and Marie Sahleen purchased the school in 1968 and remodeled the building into their residence. The large 6 over 6 double hung windows were replaced with picture windows and the prominent arched portico on the front of the building was truncated leaving wide brick columns on either side of the front door. Today the school house looks like a typical ranch house, popular throughout the west in the 1970s.