Francis was settled in 1865. In the 1890s the Utah Central Railroad hired locals from surrounding communities to grade a route and set ties along the Provo River over Wolf Creek Pass. The project went broke however, and none of the workmen were paid. The ties were removed and used as fence posts.

Woodland was settled in 1867 along the valley of the Provo River. 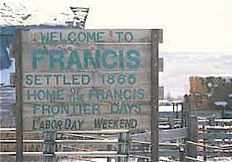