Wanship was settled in 1857, and named after a Ute Chief. It was once a hub for coal from Coalville, timber from Kamas, and silver from Park City.

Two railroads passed through Wanship on their way to Park City. The Union Pacific Spur was built up Silver Creek Canyon in 1879, at the same time as a narrow gauge track was built by the Utah Central Railroad. Before then, wagons hauled grain, coal, and flour from mills. 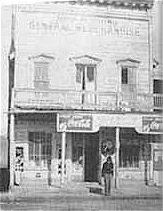