Hoytsville was settled in the autumn of 1859, but in 1866 the houses were torn down to build a fort against the Indians. Early homes were made of brick (baked 150,000 at a time). Homes of this brick include:

The Hoyt Mansion, the large stone house built from 1863-1868, is one of Utah's most elegant 19th century homes and can be seen from Creamery Lane 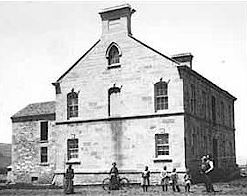