Echo Canyon was described in 1860 by Sir Richard Burton: "An American artist might extract from such scenery as Echo Canyon, a system of architecture as original and as national as Egypt ever borrowed from her sandstone ledges or the North of Europe from the depths of her fir forests."

The trail through Echo Canyon was one of the most important of westward expansion. Buffalo, native Americans, and explorers used this natural pathway between the lush grass of Wyoming and the salt deserts to the west. They were later followed by wagon trains, the Mormon pioneers in 1847, the Overland Stage, the Pony Express, gold prospectors and silver miners, the Union Pacific railroad, the 1st transcontinental telegraph line, the Lincoln Highway, and Interstate 80. 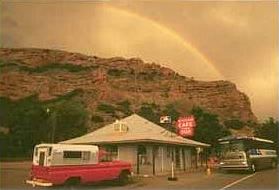 In 1858, the U.S. Army was sent to Utah to quell the Mormon Rebellion and enforce laws prohibiting polygamy. A Mormon militia dammed the creek with a rock wall at the Narrows, and built other fortifications to deter the soldiers. Luckily, they were never needed, but the stone relics can still be seen.

Pony Express riders carried the mail on the Mormon Trail down Echo Canyon to Echo, Henefer, and Salt Lake City for 18 months starting in 1860. The cost for a 10 word message from Salt Lake City to New York City was $5 (equivalent to $85 today). It was abandoned when the transcontinental telegraph was finished in the fall of 1861. Eight years later the transcontinental railroad reached the Weber Canyon on its way to a meeting with the Central Pacific on Promontory Point near the Great Salt Lake.

Wahsatch is an abandoned railroad division point for crew and engine changes. Hundreds of workers lived on the treeless divide at the head of Echo Canyon during the railroad construction of 1868 and 1869.

Named for the surrounding castle-like sandstone cliffs, Castle Rock was a Pony Express and stage station. Attracted by the hope of trading with travelers through the canyon, a number of families homesteaded the land and began a town. The active though small community soon boasted a railroad depot, section house for railroad workers, gas station, store, water windmill, and schoolhouse. Hanging Rock, in Emory, is another abandoned Pony Express Station.

Echo was settled in 1854 by James Bromley, who ran the Weber Stage Station. Fourteen years later, tents, saloons, and brothels sprang up as men built the transcontinental railroad. When the railroad moved on, 7 human skeletons were discovered under 1 saloon. When the old stage station was demolished a love letter to a Pony Express rider, a $5 gold piece, and a pair of gold rim spectacles were found in the walls.

Underneath towering conglomerate cliffs is the Echo Church, built in 1876, with a belfry steeple, wooden entry, pine paneled interior, and brick walls. It was a public school from 1880 to 1913, and Mormon chapel for 50 years until 1963. Vacant for 20 years the Echo Church is a meeting hall and museum alongside the Echo Cemetery. 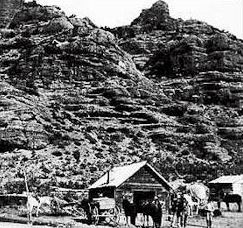 In July, 1846, the Harlan-Young party drove their wagons past this site and down the nearly impassable lower Weber River (named after Captain John Weber, a member of the 1823 Ashley Fur expedition). They found a rocky canyon with a raging river in its bottoms. That summer the Donner-Reed party avoided the canyon and blazed a new trail to the west. It took 21 days to travel the 36 miles to the Great Salt Lake. The delay would prove fatal for them in the Sierra Nevada later that autumn.

Brigham Young led his Mormon immigrants over this new trail in 1847 to the Salt Lake Valley. From 1847 to 1867, 80,000 Mormon immigrants traveled this way by wagon, handcart and foot. Pony Express riders took the same cutoff.