It's hard to believe that our growing community was once something other than a resort town. While some of Summit County's historic structures appear to be waiting for us to forget them, so that they can crumble into the soft layers of earth unnoticed, many have been combed over to suit the new era of postmodern resort kitsch.

The Kimball Hotel is in neither category. Located between Kimball and Silver Creek Junctions on the north side of Interstate 80, surrounded by ranches, lies the once elegant hotel. Though it hasn't been enlisted in the county's resort efforts, the building has been well preserved. Perhaps that's because the hotel was once a focal point of the county. 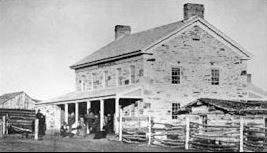 In the late 1800s the hotel was a weigh station along the Overland Stage Route. Passengers traveling east or west found themselves bedding in 1 of the 11 rooms that were considered some of the finest along the Overland Route. Those guests included Walt Whitman, Mark Twain and Horace Greeley.

While at the hotel, they ate fresh trout caught by torchlight out of Kimball's Creek, wild sage grouse (now nearly endangered), wild duck and fresh beef. Built in 1862 by William H. Kimball, the son of Heber C. Kimball who was a counselor to Brigham Young, the family owned and operated the hotel until the turn of the century.

The Kimball Hotel maintained several successful businesses. When the railroad and automobiles arrived in Summit County, the Kimballs adapted to the changing technology and ways of life. The Kimball family offered a light express stagecoach between Salt Lake City and Park City as well as U.S. local mail service. The hotel staff hauled freight and ore from the mines and rented saddle horses, buckboards, sleds and cutters through their satellite station, The Dexter Livery, located at the bottom of Main Street.

The Kimballs also took advantage of the growing non-Mormon crowd that descended upon the area by opening a saloon inside the hand carved brick walls. Around the early 1890s, some of the brothers dammed up Kimball Creek, cut blocks of ice from the build up, wrapped them in sawdust and stored them in nearby caves for future transport to Salt Lake City. They called their venture the Park City Ice Company.

Even after the frequent use of coaches had succumbed to rails and motors, the Kimballs provided excursions in the stagecoaches to the Midway hot pots and other social adventures for the large, diverse population in Park City.

When the Lincoln Highway Association built the 1st transcontinental highway in 1913, its route ran right in front of the old sandstone building. But in 1960, when the plans for Interstate 80 were being drawn, engineers were persuaded to veer around the back of the building in order to preserve 1 of the oldest remaining structures along the Overland Stage and perhaps in all of Summit County.

By Sandra Morrison
Located at Interstate 80 rest stop, 1.5 miles east of Kimball's Junction. View a map of the area.