One hundred years after the 1st Mormon pioneers settled permanently in Peoa, locals gathered to celebrate in their huge new meeting house. It was not the 1st chapel they had built and it would not be the last. Few gathered that day could have imagined that in just 36 years the building would be obsolete and an even larger meeting house needed.

Peoa's original meeting house was built 9 years after the 1st pioneers arrived. Led by W.W. Phelps, the group of 28 men, 1 woman and 1 boy would layout the area. "I surveyed between 20 and 30 lots from 10 to 22 acres each of tolerable fair appearance for grain and meadow land," he reported in the May 20, 1857, edition of the Deseret News. "Logs were cut and hauled for several houses, grain sown, and potatoes planted." These 1st settlers left that fall avoiding the harsh winter weather and apparently did not return until May 1860.

By 1865, the Mormon population was sufficiently established to spend time constructing a church. That year also marked the beginning of the Black Hawk War. Fortunately the meeting house had been constructed of logs so was easily dismantled and rebuilt. It was reconstructed inside the town's newly established fort, built for protection from the anticipated Indian attacks. 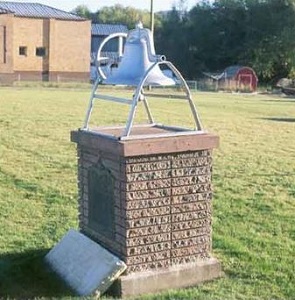 Peoa grew and the log cabin became obsolete, so in 1869 a larger 33 foot by 23 foot rock chapel was built by the local faithful. By the turn of the century, however, a new meeting house was under consideration. Built of the locally plentiful sandstone, this much larger and finer church featured a large bell tower and stain glass transom windows.

Franklin Marchant remembered the construction in his journal: "The foundation was completed and the walls were up a few feet in some places when the men who had been hired to do the job quit and the building operations stopped. When Arthur Maxwell was ordained Bishop it was his job to get the building finished and a building committee was appointed and the contract was given to William H. Branch to lay the rock walls. The carpenter work was mostly done by local men but L.E. Fitch was hired to supervise building the roof. His wages for this work were less than fifty dollars. Men volunteered in goodly numbers to assist with the work. . . We were very proud of the building when it was completed."

The Great War and following Depression took their toll on subsequent building plans. Gilbert Reed Marchant was faced with the consequences in 1934. "We were confronted with many problems as soon as we were put in the bishopric. First of all, the furnace in the church was burned out, and we had to install a new furnace. The building, even though it was many years old had not been finished and therefore not dedicated" he wrote in his journal. "We made up our minds to renovate it and finish it and have it dedicated. Many nights myself and counselors with other members of the ward worked until after midnight to improve the church house. Finally the 27 of October 1940, we had the building in shape."

But by 1950, the meeting house was again the topic of discussion. Bishop Adelbert "Del" Marchant remembers: "We met and decided to remodel the church. We had some authorities from Salt Lake to tell us what we could do. They condemned the church for remodeling and told us to build a new building. I know I was inspired at that time to tell the members that we would build a new building. We did built it and had it completed and dedicated in less than two years, because all of the people worked together." The new brick chapel cost $80,000.

History repeated itself in 1982, when the ward began discussing remodeling the brick chapel. But after negotiating for more than a year with the building department of the LDS Church, the plan changed to constructing a new chapel on a new site, the bench between Peoa and Oakley. Dedicated on April 3, 1986, it cost nearly $1 million. The brick church in Peoa was demolished and the land now sits vacant, serving as Peoa's town park. Only a bell remains to mark the once bustling site.