It was from the etchings in a log that the small town of Peoa received its name. Found in 1857, by some of the 1st white Mormon settlers, the letters peoha were believed to be the name of a previous trapper or a Native Indian name.

Peoa was once a fertile, thickly vegetated area that was full of wildlife and fresh-water springs. The lifeline of the Weber River still gushes through its core bringing abundant water for farming and livestock. The local Indians that are believed by some to be a tribe of the Ute Indians called the Timpanohoges relied heavily upon the area's wildlife and vegetation for their livelihood.

The original residents were rightfully more than a little upset when the new settlers began to deplete their food sources. The Black Hawk War was the culmination of the strife between the 2 sides. As with all the communities in Summit County, the new settlers prevailed while the surviving native residents moved away in search of new lives. 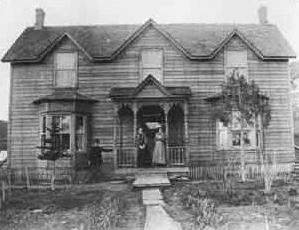 Oscar Fitzallen Lyons was 1 of the new settlers. He was born in Ireland in 1838, and immigrated to America with his parents not long after his birth. Lyon's parents soon became converts to the Mormon Church and eventually made the long trek to Utah in 1849.

It as around 1860, the Lyons family moved to the small niche in the hills of Summit County. In 1869, Oscar married Maria L. Marchant, the daughter of Abraham Marchant, who was 1 of the town's founders and Mormon Bishop.

Oscar built his house between 1875 and 1880 in a plank-on-plank style that was common in parts of the East Coast and Canada. The home was built using 4 foot by 8 foot planks that were locally harvested and sawn.

The house is 1 room deep, 2 rooms wide and 2 stories high with projecting bay windows on the ground level and pointed arch wall dormers over the windows on the 2nd floor. The vernacular, central passage home sits on Woodenshoe Lane, a street that was named after all the Scandinavians that lived on the street and wore their traditional wooden clogs.

Lyons was a farmer and rancher as well as the postmaster for the growing community. For a while he used the home as the main post office until a regulation building was later constructed. It was in the new post office that Lyons witnessed the town's 1st telephone installed in 1896. Later, Lyons would travel to England for a Mormon mission and when he returned he became an attorney for Summit County.

Lyons could also kick up a few heels and was a drummer for the local band who played at many of the local dances in Summit County. Lyons died in 1908 and the house became the long-time home for Rueben Jenson who was a Federal Trapper for the area. While the home was originally unpainted, it is currently the best and only recorded example of its style in all of Utah and the best preserved house in Peoa from the 1880 to 1890 time period.