The grand opening was held at 9 a.m. December 21, 1963 in the breezeway of the Resort Center. Officers and dignitaries from the city, the business community and United Park City Mines Company were in attendance, as was the Park City High School Band and members of the Utah National Guard.

In the December 26, edition of The Park Record, the new resort was called "stupendous and unbelievable." That was when the resort had only the gondola, the Prospector Lift and 2 J-bars. Today it boasts 14 lifts. The photo, taken 4 or 5 years after the resort opened, shows the ski school with its unique bell tower and sign at the base of the mountain. The special event attracting the crowd was the Salt Lake Tribune Ski Classic. 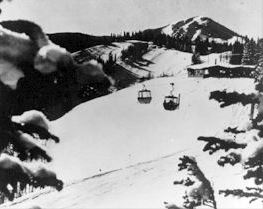