William Morrell built the 1st house near a large spring in the small hamlet known today as Marion. The spring also attracted Samuel P. Hoyt of Hoytsville fame. In 1861, he constructed a house at the mouth of Hoyt Canyon and began ranching the area.

His herd of 600 to 800 cattle was one of the largest in the territory and grazed over the open range. As in Hoytsville, Hoyt's operations furnished work for many local residents.

Initially, Marion was called Morrell after William Morrell. Later in recognition of the large number of Scandinavians settling there, locals called their home Denmark. 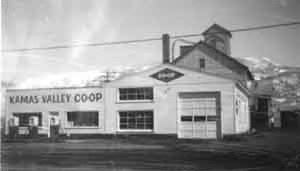 According to Mountain Memories: A Book of Remembrance 1848-1986 In the mid-1860s, John K. Lemon and his wife, Jane, moved from the Cache Valley to the Marion area. He was appointed presiding elder and the area became known as Lemonville.

Church meetings were 1st held in the Yorgen Sorenson home. Danish was spoken and sung far more than English by the homesick converts.

Two Marion's inspired the change of the town's name.

Marion Myrick moved, with her husband George and son William, to the area in 1882 and they engaged in farming until George's death in the mid-1880s.Marion remarried a local man, Erasmus Sorensen, a Danish immigrant. William grew up in the farming community and eventually married Martha Hoyt, one of Samuel Hoyt's daughters. He built the prominent 11/2 story "Eastlake" cottage, still standing on S.R. 32.

The other Marion was Elder Francis Marion Lyman, President of the Quorum of the Twelve Apostles. He arrived in 1909 to organize the local ward, appointing Seth Jones as the ward's 1st Bishop. In 1910, Seth purchased ground from Henry and Mary Jane Lewis to build a church.

It took 4 years of local labor to complete the concrete block building. Logs were cut from an area known as"Church House Grove" in the foothills of the Uintas and hauled by horse and wagon to the Steven's Saw Mill in Oakley to become lumber. John H. Salmon from Coalville was hired to supervised the work. Six years earlier John had partnered with E. J. Beggs to complete the construction of the new Summit County Courthouse in Coalville.

From Church to Co-Op

The 48 foot by 60 foot building served as the local ward church until 1943, when it was sold to the Kamas Valley Co-Operative Feed Association for $1,800. An addition made to the front of the building created the retail store and loading facilities still in use today. But the building exposes its unique past, the pale concrete blocks are revealed above the additions and the original arched church windows can still be discerned on the building's south side.

By Sandra Morrison
Located at milepost 15.9 and Highway 32. View a map.