While driving on the long stretch between Kamas and Oakley you may not know that there is a small farm community called Marion. Over 100 years ago, Marion was a burgeoning town fully equipped with a schoolhouse and other amenities.

One of the 1st settlers to the area was Samuel P. Hoyt who had migrated to the area from the town that bore his namesake, Hoytsville, which lies just south of Coalville. Hoyt moved to Marion with the hope to build his cattle ranching business on the abundant fertile ground that the valley offered.

Opportunities in the Valley

There were others who saw the opportunities in the valley of Kamas. The name that is said to be a Mootka Indian word that was originally pronounced "chanas", later changed to "camass" and eventually to Kamas. The word described a small, grassy plain nestled in the hills. 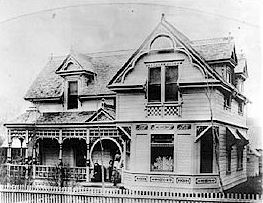 Before Hoyt arrived the valley is said to have been filled with plants, animals, streams overflowing with fish and meadows that bore wild fruits, sego lilies. Trappers, random settlers and eventually the entrepreneurs of the Mormon Church would take their toll on the area by over harvesting the wildlife and bringing in thousands of head of cattle.

George and Marian Myrick were 2 of the 1st settlers in the area. They and their adopted son, William came in search of new opportunity in 1882. There are 2 stories that surround Williams' adoption, one is that he was orphaned during a handcart journey and the other is that his widowed mother gave him to the Myricks while she was traveling on to California. The Myricks would have 3 daughters of their own Alice, Belle and Fanny, after moving to Marion.

Soon after the birth of their 3rd child, George died. One of Myricks hired hands, Erasmus Sorensen, a Danish immigrant and recent convert to the Mormon Church became Marian's 2nd husband, he was 15 years her junior. Well into her 40s, Marian had 1 child with Erasmus named Edward.

It also believed that the town of Marion received it's name from Mrs. Myrick. Previous names of the town included Lemonville, Morrell and North Kamas before Marion was settled upon. Myrick was a valued citizen in the community and a very active member of the Mormon Church.

It was Myrick's son William however that would be the owner of the great white house that sits on this prominent site. William took up ranching with his new stepfather who also worked for Sam Hoyt. Together they started the Utah Ranching and Investment Company while William prepared to marry 1 of Hoyt's daughters, Martha.

In anticipation of their wedding, Myrick hired Claude Fitch to design and build their 1½ story Eastlake Cottage. The home was elaborately decorated with checkerboard panels, latticework and hand turned posts. An octagonal turret was built on the end of the porch and several dormers were decorated with fancy gingerbread. Myrick and his wife moved into the house in 1902.

Together, William and his stepfather operated a prosperous livestock business, helped build the 1st reservoir along the Weber River and were instrumental in bringing electricity to the Kamas valley in the 1920s.

By Karri Dell Hayes
Located at Milepost 14.4 and Highway 32. View a map.