The early days of Francis were much like those in other frontier towns. Struggles were a way of life, but those that persisted were rewarded. Those pioneers knew the meaning of hard work but also knew how to enjoy themselves. A closer look will show how these pioneers sacrificed and struggled so future generations might enjoy a better way of life.

The names of the early settlers might be familiar. John Williams is said to have built the 1st cabin in the area. Samuel Gines, Solsen Sorensen, and Quince Alexander were among the other original residents. 1-page 83. These families and the others that followed faced many challenges. 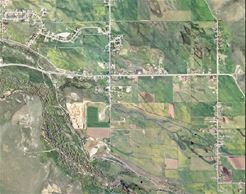 One of the many difficulties was the lack of water. A few springs provided the only water, but they were not sufficient for irrigation. The settlers dug a well a hundred feet deep in 1865 but no water was found. One of the early settlers recalls how she "took her clothes down to the Provo River to wash them." They also had to haul all of their culinary water from the river. 2 page 284.

In order to make water accessible, the South Kamas Irrigation Company was formed and began the challenging task of digging a canal. "This was a very difficult project…The work was hard and slow. The canal was made four feet wide at the bottom. After it reached the bench the canal divided into two ditches, one going north, following the foothills toward Kamas and known as the Burbidge ditch; the other coming west along the south rim of the bench and ending on what is known as the Bradshaw farm." 2 page 284.

"William Gines…remembers his mother telling him that the water first started to run on the bench from the Provo River the day he was born, August 7, 1873; and that she was so happy she felt like getting out of bed to see the water running down the ditch." 2 page 284

Because of the difficulty in obtaining water "the men of Francis supported their families by working in the timber and sawmills that were in the mountains. Sawmills were built in the mountains close to where the timber was cut…There was one in Pine Valley where the lumber was sawed for the church house. This was run by John Jones. There was Benson's Mill, and the Pack boys had a sawmill. In 1885 Bill Pace owned a saw mill in Little South Fork. In 1886 he moved this mill to the foothills above his home east of Francis.

"Francis people logged and had their timber sawed at all of these mills. The lumber was used to build their homes; was hauled to Park City for the mines, and some of it was sold to the lumber companies in Park City and Salt Lake City.

"In those days everyone got up early to get to the mill to get loaded and home before dark. Many of them left at three o'clock in the morning. The next morning they would start at two o'clock to deliver their loads in Park City." 2 page 296 to 297.

"Timber was cut on the steep slopes of the mountains and most of the roads were very narrow, steep, and dangerous. At one time Hyrum Workman went to the mountains very early in the morning for a load of lumber, with a four horse team. Coming back Hyrum stepped off his wagon, his team started [to move] and with no one to hold them back…they started running down the canyon. When Hyrum caught up to them they were all piled in a heap; one horse was dead and others badly cut up, one in such a condition they had to shoot him." 2 page 296.

A few stores and a trading post were established in the area. One of the few businesses in town was the Pace Creamery, built in 1897 by Bill Pace. 1 page 83. A spring brought water to the creamery, which was operated by steam. 2 page 301.

In 1/2 of the creamery was a large vat which held milk from the local farmers. The milk was strained as it was dumped into the vat. "Many a baby's shoe, a stocking or two, spoons, sticks, toys…were strained from the milk. The reason for these things being in there was that in the winter time people kept the milk in their kitchens to keep it from freezing; and to keep milk sweet, the lid was left off…for ventilation. Babies could easily climb up and drop whatever they happened to have in their hands into the can, and the farmers, not knowing, would send the milk to the creamery." 2 page 301.

Farmers were paid once a month for their milk, although many traded for groceries, dry goods or hardware from the store for their pay. "Solen Sorenson, Nathen Vernon, Hyrum Workman, and Ed Sorsensen were the first milk haulers. The milk was gathered throughout the valley with teams hitched to wagons in the summer and to sleighs in the winter." 2 page 302.

Martha Hoyt Myrick "ran the whole creamery, from the testing and weighing of milk to the packing of the butter. Martha was a graduate from the Agricultural College at Logan where she had studied dairying and had learned to care for milk and to manufacture its products." 2 page 302. Running a dairy was hard work. "She got up at…five a.m.; made a fire and got steam up in the boiler ready for work. She worked from early until late, sometimes, if things went wrong, until midnight." 2 page 302.

One summer the creamery produced over 200 pounds of butter a day. Much of this butter was marketed in Park City and Salt Lake City. The 1st load of butter taken to Salt Lake City was for the jubilee held July 24th, the year Utah celebrated Statehood." 2 page 302.

As businesses began to flourish education was not forgotten. "The first school was held in Francis in one room of John (Jack) Richardson's home…The children sat on rough benches and were taught writing, spelling and some arithmetic…In 1888-89 school was held in a small log cabin north from the Francis corner." 2 page 302. The 1st official school house was built in 1892.

"The new school house was a one room log house built on the site that Mr. Eskilson donated, one acre of land…A big barrel like stove stood in the center of the room. The stove pipe went straight up nearly to the high ceiling, then along to the end of the building to a chimney."

Pearl Workmen Atkinson, once a student at the school, shared an experience about the stove. "One day while we were all busy, studying, one joint of the pipe came loose and came down with a bang, hot and full of soot, which frightened us all. Luckily no one was hurt…In those days the small children were seated in front and the large ones at the back of the room. At the time the pipe fell we small ones were at the board. If this had not been so I might have been hurt as the falling pipe hi[t] my desk. The two ends that were up were hanging just slanting enough to let the soot pour out of both ends over my desk. I cried because my slate got broken. It had just been given to me, new." 2 page 298 to 99.

Pearl Atkinson further shared "School was always opened with a song and sometimes with prayer; the teacher would sometimes read a good book to us. Usually she read it first thing so all would be sure to be early."

"We always had a yearly sleigh ride to look forward to. We also had spelling matches. Our school would visit other schools and try to spell down their best spellers. This was quite a thing to get us to learn to spell. Our outdoor games were round tag, and baseball, or rounders, as we called it. Both old and young would play, even our teachers." 2 page 300.

Getting to school was often a challenge for the students. Atkinson tells that '…The wild animals, as well as the Indians, were too dangerous for me to go alone. My two brothers and I were going to school one morning, wading through snow drifts up to our waists, as there were no snow plows in those days…We each carried a long stick and were hitting the snow when up jumped two of the prettiest dogs! They trotted up toward the hills …Later some men killed two cougars up by Woodland, which we found out were our pretty dogs. Our guardian Angel must have been with us that day." 2 page 299.

As the community grew the settlers spent some of their time on recreation. An amusement hall was built around 1914 by the church. Lumber was brought down from the mountains just like it was for the church house. Francis' residents came together and donated their efforts and the church gave the money that was needed. 2 page 293.

"Throughout the year, jubilees and concerts, demonstrations and parades, dramatics and fairs drew the people together for entertainment, allowing them for a while to forget their daily struggles in taming the wild environment…Countywide fairs were staged by the county selectmen. Foot races of all kinds, potato-sack races, horseshoe pitching, ball games, and other sports and games permitted young and old alike to prove their mettle and join in the fun." 1 page 198 to 99.

In spite of all the hardships of pioneering, those early settlers loved to dance. On occasions they would "hire an orchestra from Salt Lake or Park City and the whole valley came to dance…Sometimes the music would come from the fiddle of Hen Walker who would walk about the valley with his violin, playing for dances…Tickets to the dance were often paid for in produce. A hot supper was served and many times they stayed until it was light." 2 page 294.

"Those first settlers of Francis were a close nit group. They worked, learned and played hard. Together they built a town and a legacy for all of us that have come since." -Andrea Nelson

Provided Courtesy of the Summit Quarterly