Once a Multicultural Community

It's hard to imagine that the tiny town of Echo was once a bustling pit stop on the California Trail, The Overland Express and ultimately the Union Pacific Railroad. Today the sleepy valley is almost as quiet as the day James E. Bromley settled the area in 1854.

Echo grew gradually as a multicultural community until the news arrived that the railroad would be passing through. It was then, that former Mormon Church President's son, Brigham Young Jr. purchased the entire Echo valley from Bromley in 1860s for a mere $400. 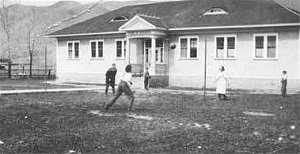 Young's plan was to mold the area into a traditional Mormon community. He designed the town himself naming the streets after some of his wives and a handful of Union Pacific executives.

But Young's quest for an all-Mormon community failed, in fact, the town became predominantly non-Mormon due to the transient nature of the railroad business and its premium location for mining and ranching. By 1868, Echo was big town but it did not grow into the 'city' Young had hoped it would be.

The Need for School

Because the town had grown so large it became inevitable that the eclectic community be integrated into the statewide, publicly funded school system. Between 1880-1902 the children of Echo used the local Presbyterian Church for classes during the week. When the newer school was built it would resemble the changing atmosphere in education in Utah.

Built in 1914 on South Echo Road the new, 2 room structure was designed for school purposes only. Averaging around 40 students a year, grades 1 to 6, the building exhibits the growing concern and commitment to education by steering away from the church look and into a more formal, practical layout. It is also believed that the Union Pacific Railroad may have contributed in some way to the school as its architecture somewhat resembles a train depot.

The school was utilized between 1914 to 1940s. A former student, Laurel Brewer who currently lives in Henefer recalled the names of his teachers, Mrs. McClerk for grades 1-3 and Gerald Taylor who taught grades 4 to 6. He said that there was a hallway that separated the rooms and there was no indoor plumbing. The bathroom was a 2 seater outhouse with slider boxes.

Decline of the Railroad

By the late 1940s the railroad business had severely declined and the town of Echo was slowly diminishing as well. The Echo School was closed and children were bussed to the neighboring town of Coalville.

When the construction for Interstate 80 was taking place, a portion of the school grounds was taken for its right-of-way. The building was moved a short distance, given a concrete foundation. Today the structure is currently mothballed, hoping to find a future use in this busy crossroads of western history.