Today's popular super stores, offering 1 stop shopping are not actually a modern concept. In the early 1900s a movement began in Summit County where local stores merged or new institutions were established to reduce costs and offer customers larger selection of stock. One such business was the Summit Furniture and Mercantile Company in Coalville. 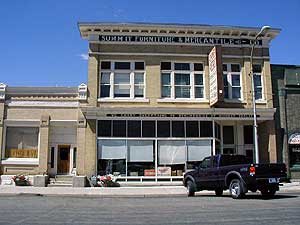 Selling new furniture - everything good, everything modern - manager Joseph Rees opened the new store on Wednesday March 20, 1907, in the Old Boyden Drugstore, now a vacant lot next to the Boyden block building. Druggist John Boyden had moved to his new 2 story brick building in 1904, permitting him to lease out his old 1 story wood building. The new furniture store was so successful that the owners pursued acquiring their own building.

In August 1907, they purchased 2 lots immediately south of their store from Hannah Elizabeth Smith for $3,500 and began planning an impressive new building for Coalville's Main Street. To finance the construction, the company doubled their initial capital stock from $25,000 to $50,000 and expanded their business to include hardware, clothing and shoes.

The company was renamed the Summit Furniture and Mercantile Company. Prospective stockholders were offered the additional benefit of store merchandise at 10% over cost to entice their investment in the venture.

In August 1908, the mercantile let a contract to local builder J.H. Salmon to excavate and construct the foundation and basement of the new building. Four years earlier, Salmon had built the new County Courthouse down the street. J. G Kihlstom was hired that October to build the 2 story brick Victorian style commercial building. The store's architect J.E. Allen, also administered the construction.

That November Allen returned the brick to the supplier because of its lack of uniform color, size and thickness. He complained the brick was full of chips and cracks and some even burnt. The modern building featured the latest in technology including an Otis freight elevator to serve all 3 floors, cost $190. The total cost of the elegant building was almost $15,000.

In February 1909, as the building neared completion, their competitor, the Peoples Mercantile Company closed to take inventory before merging with the Summit Mercantile Owner, Alma Eldredge decided to consolidate to ensure fair and honorable treatment to each and everyone of its patrons.

Another casualty to the Summit Mercantile was John L. Mitchell's Cash Bargain Store. In February 1906, he had leased the building at 12 S. Main (now Simister's Art and Craft) for $10 per month for 5 years. His lease agreement stated the property shall not be used for a saloon or any immoral purpose.

With the popularity of indoor plumbing, in 1913 the company advertised Now is the time to get your bath tub, closet, sinks or lavatory. We have the best line on earth and can figure with you on a very small margin of profit. Our plumber is now installing many jobs throughout the city. You had better get busy and do your installation while he is here. So much for subtlety in early advertising.

Nearly a century later, the Summit Furniture and Mercantile Company is still in business, operated by Chester and Jim Blonquist and their family, descendants of one of the original founders Axcil Blonquist.