The Rail Trail Corridor is a 30-mile arts, culture, recreation, and tourism corridor designed to cultivate a strong sense of community and offer opportunities for revitalization and resource protection.

Now is your chance to get involved in the second round of input! Here's how:

Fill out this survey by Dec. 1, 2022, after reviewing our draft plan (access the plan here). Participating in this survey to give feedback on the progress of our Rail Trail Corridor Plan and provide more specific input. If you have any additional suggestions, or edits, or would like to submit photographs of the rail trail, please email mmcdonough@summitcounty.org. 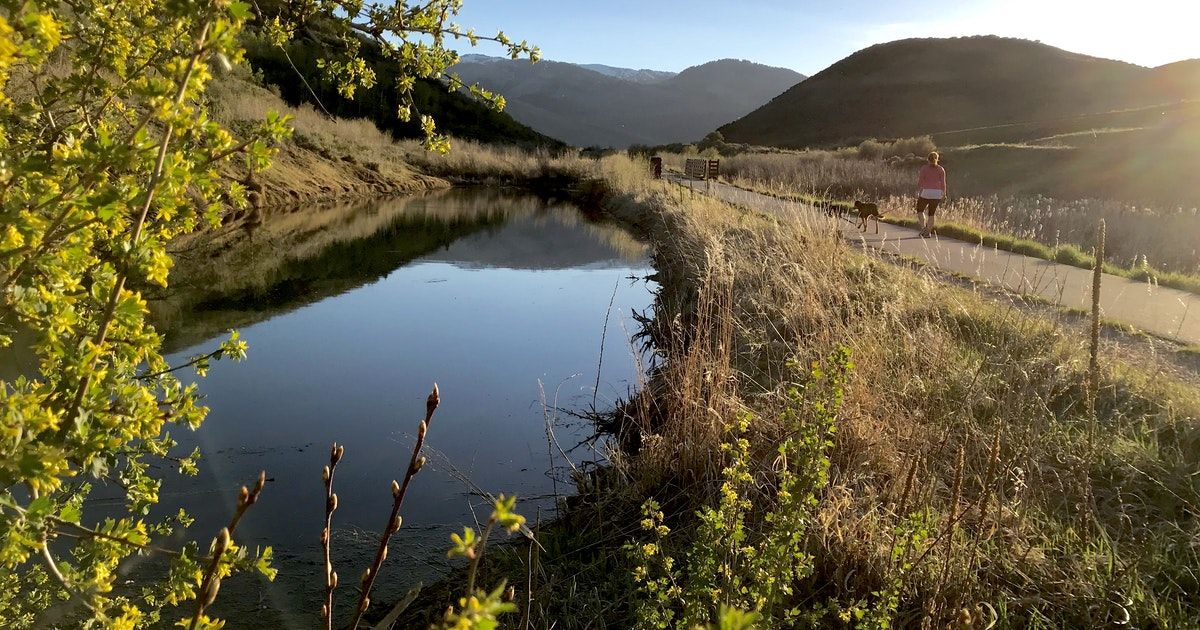 What is your vision for the future of Summit County's Rail Trail Corridor? We have the opportunity to strategically plan in a way that preserves the assets of the area while also magnifying the positive impact for local residents and visitors alike.

Fill out this survey by Dec. 1, 2022 after reviewing our draft plan materials below: 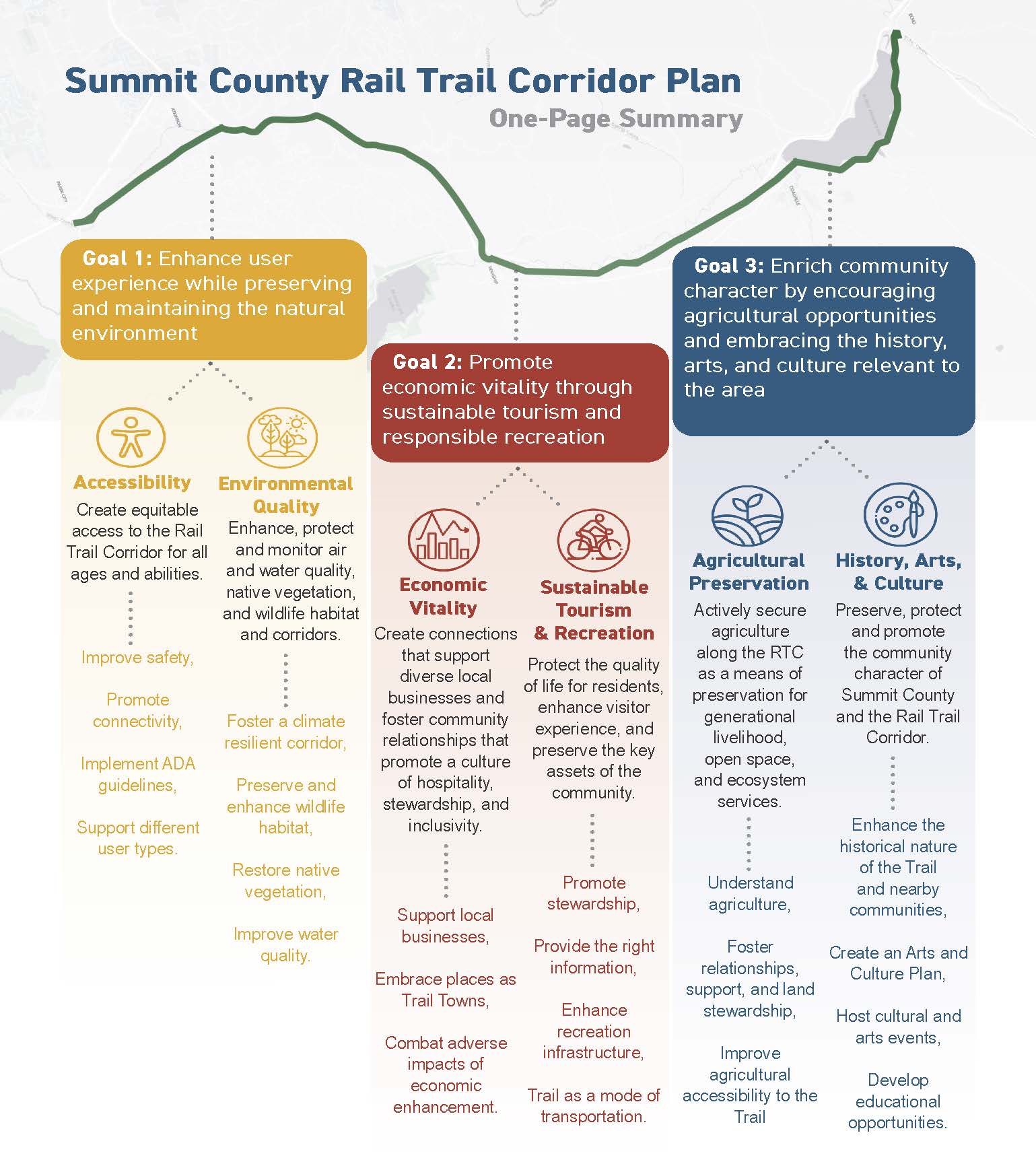 2. Complete 190-page Draft Plan:
(To expand into full-screen view and to download, click the arrow in the top right corner of the image below)


3. If you have any additional suggestions, or edits, or would like to submit photographs of the rail trail, please email mmcdonough@summitcounty.org.

Serving as the hub of the Summit Scenic Byway Corridor, the rail trail has been operating as a non-motorized trail since 1992. The trail crosses an area rich in history from the Wasatch Mountains near Park City, across wetland meadows in Silver Creek Canyon, through the towns of Wanship and Coalville, and along the Weber River to Echo Reservoir. 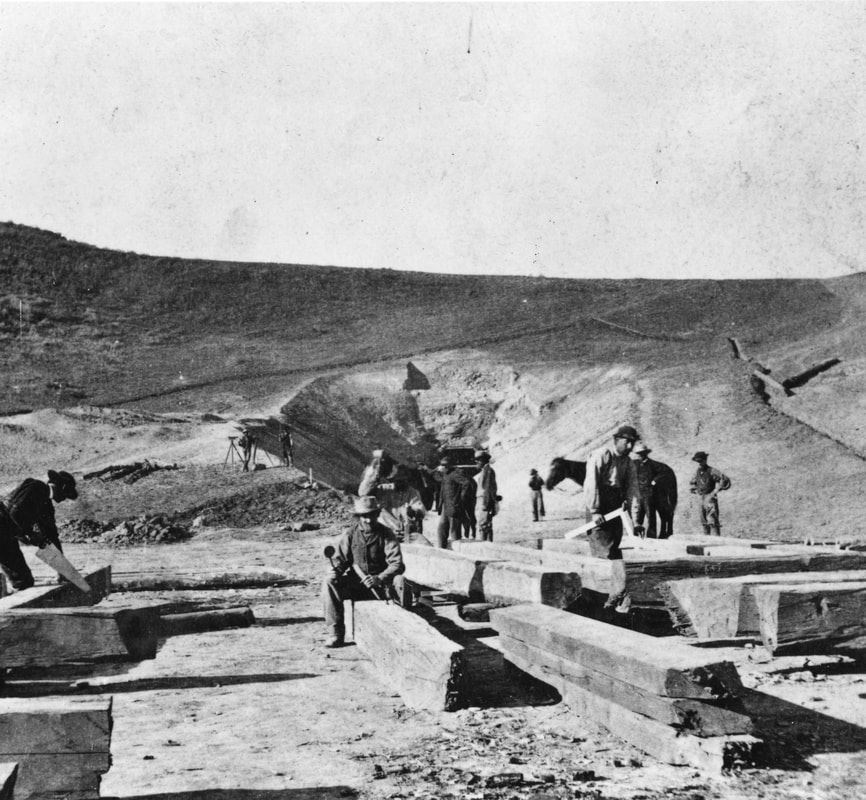 The Union Pacific, the first railroad to enter the Utah territory, began construction down Echo Canyon in 1868 as part of the transcontinental railroad.  The building of the railroad provided work for settlers, some of which was negotiated by Brigham Young.  The value of the railroad cannot be overstated. Cattle, sheep, and farm crops and goods could be brought to market more quickly and cheaply.  Needed supplies were brought back on the trains’ reverse trips.  The towns along the railroad routes prospered by serving the railroad and its employees.  Communication and travel were made significantly easier. 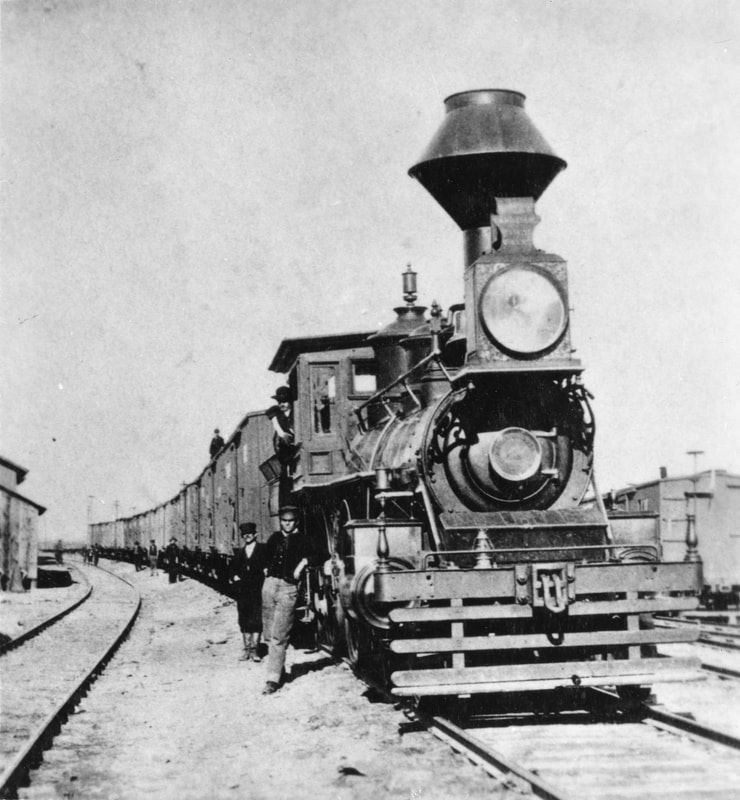 But not all local industries were able to benefit by the introduction of the railroad.  In Coalville and Grass Creek, where coal mining began in the 1860’s, coal from the mines was hauled fifty miles to Salt Lake City by team and wagon, which was costly and particularly difficult during winter months when coal was most needed. 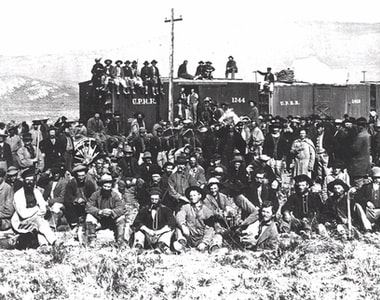 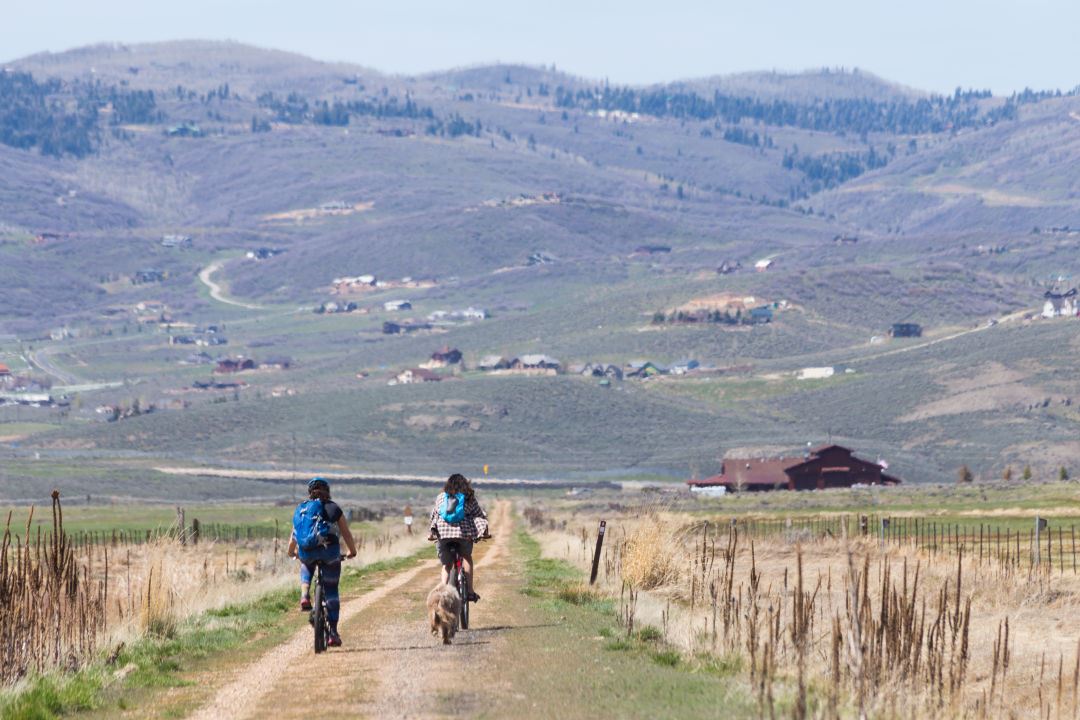 In 1989, Union Pacific abandoned the rail line leaving a vital corridor connection unused.  Local community leaders banded together and worked with the Division of Parks and Recreation to convert the abandoned line into a trail.  The Union Pacific Rail Trail State Park was dedicated in 1992 and was inducted into the national Rails to Trails Conservancy Hall of Fame in 2010.

Many of these trails share a common story.  The introduction of the rail line reduced travel times increased profits and encouraged the movement of people and supplies.  Many small towns, neighborhoods, and cities sprang up along the rail corridor and prospered.  But as the automobile gained dominance, the use of the train decreased.  This left previously vibrant communities without opportunities for economic development for decades.

The intention of rail trails is to utilize and highlight these existing connections between communities. The impact of these trail projects goes far beyond that of a recreational amenity.  Planning around and investment in these corridors have led to social and economic revitalization for communities across the country.

The Historic Union Pacific Rail Trail is an invaluable resource.  We have the opportunity to make strategic land planning choices in order to shape the future of the corridor surrounding the trail that will impact the future of Summit County as a whole. 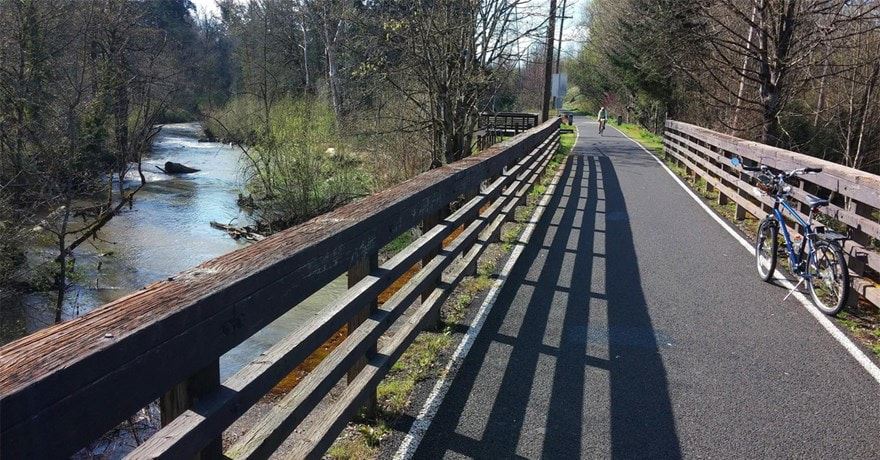 Springwater Corridor
This 21-mile trail runs from the banks of the Willamette River in downtown Portland to agricultural lands in the rural exurbs.  Much like the Union Pacific Rail Trail, Springwater follows an abandoned rail line that was previously used to transport materials and people.  In the early 1900s, towns sprang up along the rail and prospered as thousands of people were carried along the route.  With the popularity of automobiles on the rise, the Springwater line stopped carrying passengers in 1958. Since its conversion to a rail trail in 2006, an average of 1.2 million users enjoy the trail annually.  The trail connects urban, rural, residential, commercial, and retail districts.  The previously bypassed towns and neighborhoods have had an influx of visitors via the trail. 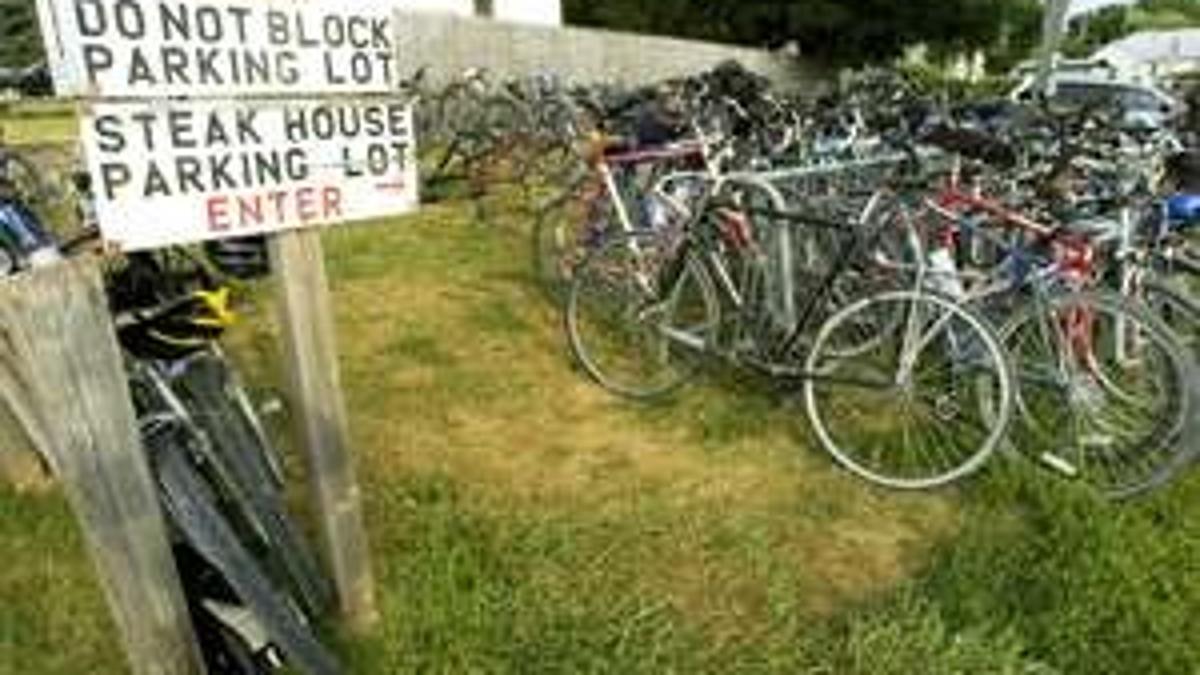 Wabash Trace Nature Trail
This trail winds 63 miles from the outskirts of Council Bluffs, Iowa, to the small town of Blanchard near the border of Missouri. Trail users enjoy spectacular views of prairies and woodlands that are full of history.  Its roots go back to the Wabash Railroad, which was one of the most important connections between the farmlands, factories and people of the American heartland and points east in the late 19th and early 20th centuries. Through ten years of restoration work and subsequent use by locals and tourists, a tradition has emerged.  Nowadays, it is not unusual for several thousand cyclists to ride down a portion of the trail in order to attend a Thursday night taco night at local restaurant along the trail (a steakhouse serving tacos).  Cyclists can then continue through several small towns rich with history that have their own restaurants, bars, and cafes accessible from the trail.